We have just finished the theory component of operator training in Las Vegas, Honduras. Five weeks of classes Tuesday through Friday. We have covered plant components, water systems, basic math and unit conversions. We’ve taken two field trips. And we’ve been building the flocculator baffles, plate settlers in the sedimentation tank, and piping for the filters. In the morning, we discuss the theory behind all the water treatment processes in the plant, and after lunch we fabricate the hydraulic components of those processes. Yesterday morning we were discussing the formation of the floc blanket in the sedimentation tanks, and in the afternoon we used heated oil and aluminum molds to form rectangular ends in 1.5” pipes for creating the planar jets that will suspend the floc blanket. During fabrication, we try to have a job for all 14 candidates, which sometimes becomes a managerial nightmare. Especially because my limited Spanish leaves me relying heavily on complex gesticulations to convey complex fabrication techniques. Below are some observations and moments over the course of the last five weeks of trainings.

The group of operator candidates for Las Vegas are fantastically enthusiastic, constantly asking questions and making jokes and eager to help one another. Oscar is the class clown… a short, fit 40 something year old who never resists telling a joke at the Gringos’ expense. Louie is a quiet industrial engineer who has lived in Las Vegas since his birth 35 years ago. Vincent, another eager learner, sits next to me every day so he can try out his English and I can work on my Spanish. Gordon spent 12 years working on a cruise, traveling around the world before coming back to Las Vegas to be with his family. He speaks wonderful English and has pictures of himself in Alaska, the Bahamas and India. Billy has one of the broadest and most reliable smiles I’ve ever seen, and Blaise’s calm attitude sails her through the toughest of unit conversions. 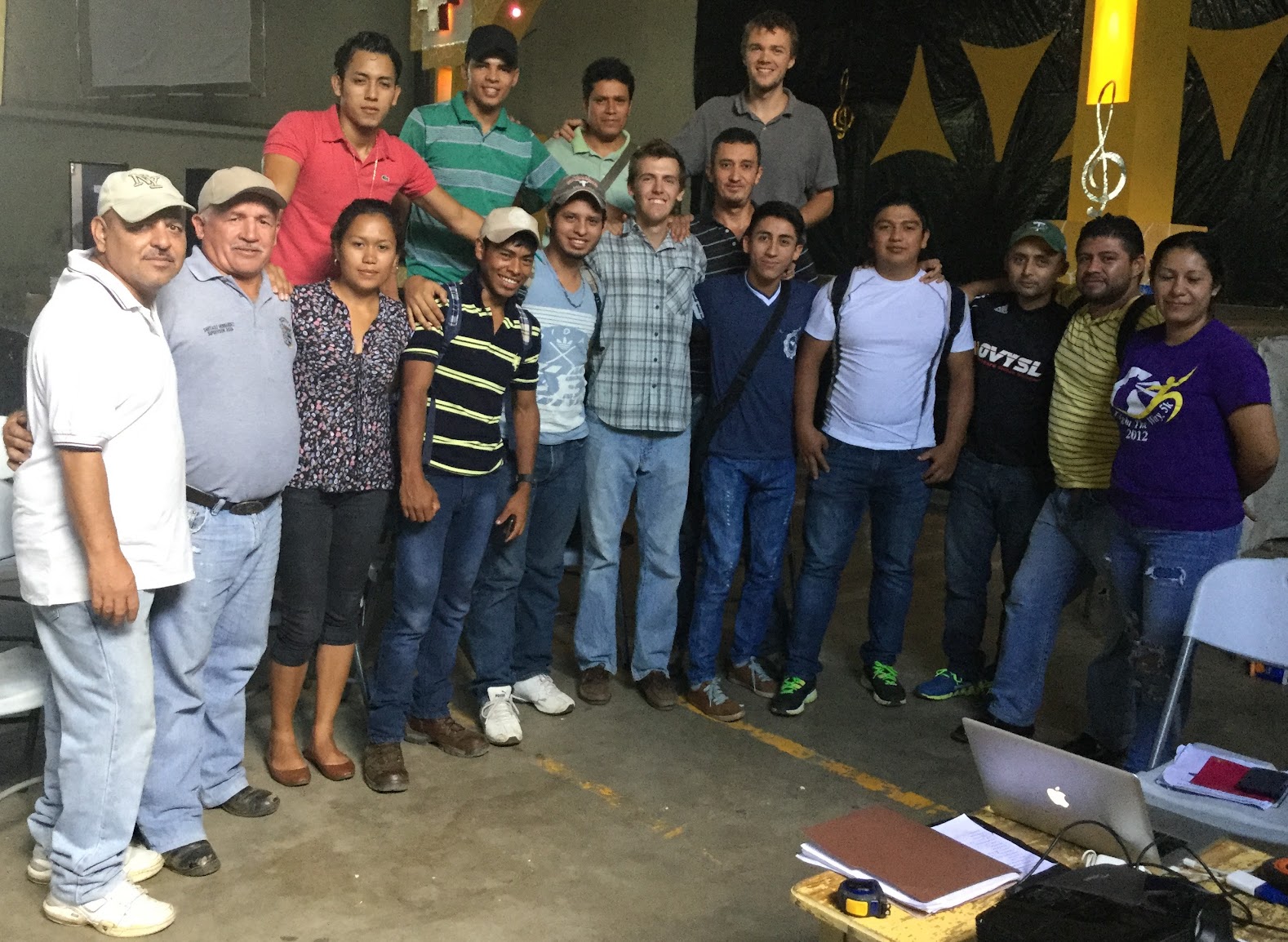 On Tuesday, we took the operators on a field trip to the plant at San Nicolas, that town with the huge tree in the center. Tulio, the operator there is a sprite 5’3” twenty five year old who leaps from one concrete wall to another with mesmerizing confidence. He led all 14 potential Las-Vegas operators through the plant, explaining in great detail not only the day-to-day of his job, but also some of the theory that goes into making the plant, how he and the plant fit within the larger context of water treatment, the relationship the plant and the Water Board has with Cornell, and the unique operating procedures he has occasionally had to invent on the spot. At the end of the tour, he performed a filter backwash. The first step was to release the air trap from a siphon that then sucks the full filter flow rate off the top of the filter. The water level in the entrance tank drops down so that water only comes in to the bottom-most inlet. At that point the water is all flowing in the same direction throughout the filter with four times the velocity as it flows during normal (forward) filtration. That higher velocity sets the sand in motion, and the whole 2 m deep column of sand expands to 1.3 times the height of the settled bed, and tumbles around in chaos, unlatching the small particles of clay and coagulant that stuck to the grains during forward filtration. Those light bits of gunk rise to the top of the filter and get sucked out by the siphon while the heavy sand stays just below the siphon, whirling and roiling. Tulio leaves the filter in this state for 20 minutes, until the majority of the dirt has detached from the sand, and the water entering the siphon appears to be clean. Tulio turns the siphon back off by opening the air valve to rebuild the air trap, the water in the filter and the entrance box rises, and the water begins to enter through the 4 entrance pipes, commencing forward filtration. After the plant, we enjoyed the shade of our giant woody friend in the center.

That amazing tree in panorama 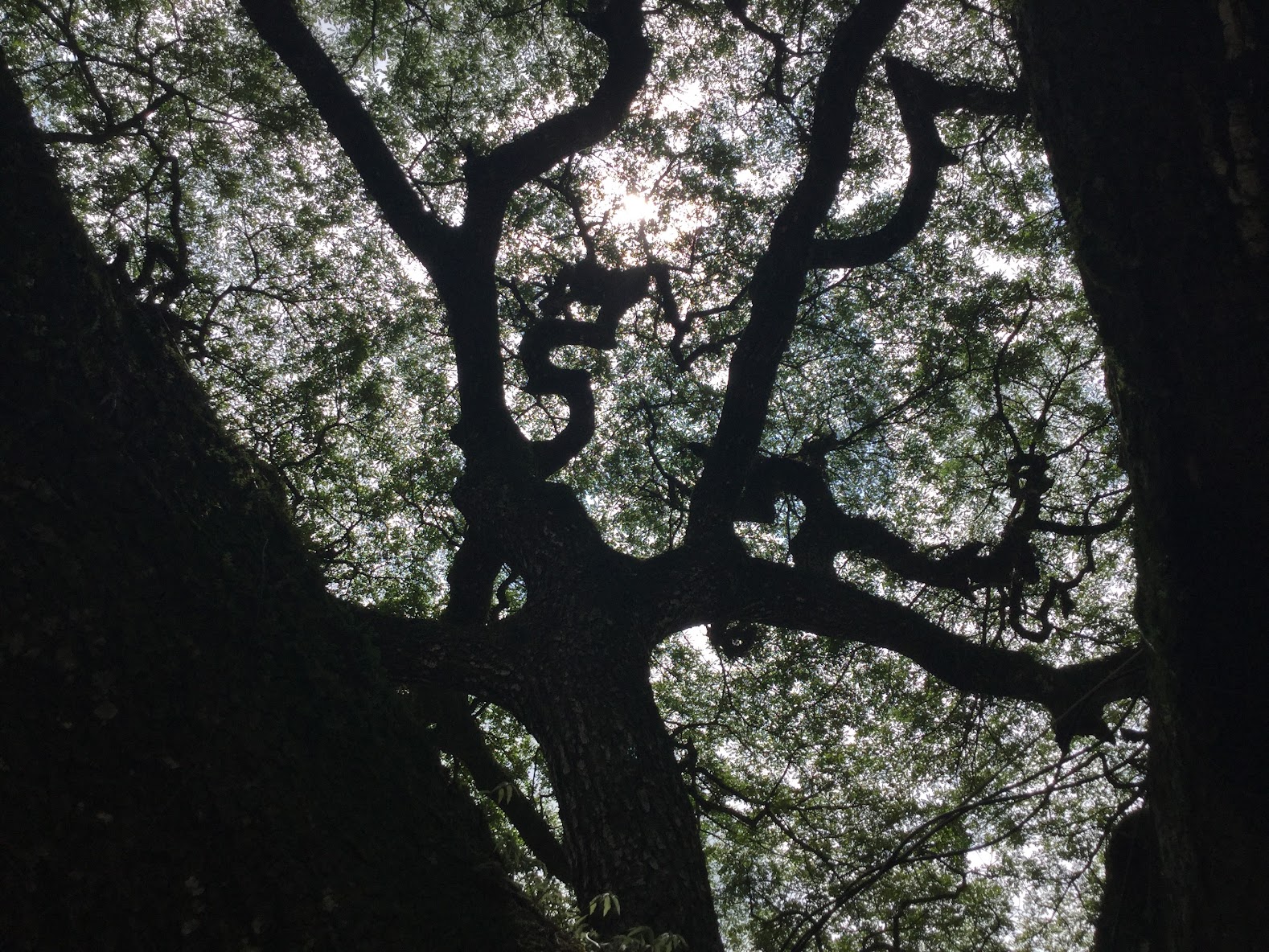 Another artsy pic of our woody friend 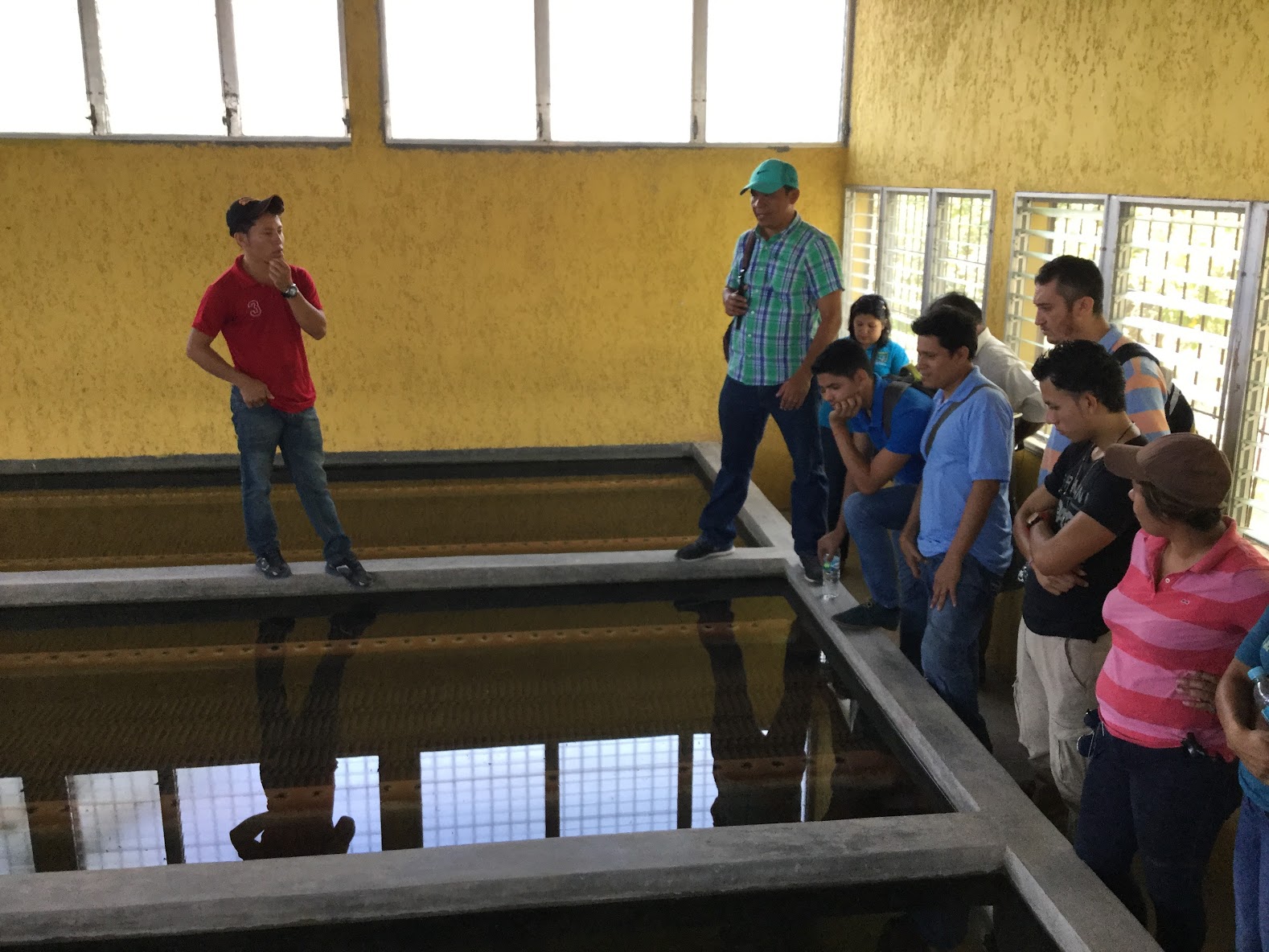 Last Friday we visited the intake structure for Las Tumbas, a remarkably clear water source that feeds the nearby mine. The municipality of Las Vegas is planning to build a conduction line from this source to the plant. Because the source is so clear, the plant is designed to send it straight to filtration. Las Tumbas is s a closed intake structure, meaning that it is built directly over a Spring. By being a closed intake structure, the water has little to no chance of contamination after it comes out the filter of the mountain. The road to the structure pokes into the mining company’s jungly property. The road drops to a small parking area, and at the bottom is a long tomb-like structure that hugs the ground and hides in the moss. A tall metal trunk sticks up as a pressure release, giving the tomb an abandoned industrial look. The trunk emits the hiss of running water which grows to great intensity as we open the trap door and peak in where the 50 liters per second gush from the side of a mountain. All 12 of the potential operators crowd around Antonio Santiago Hernandez and Ronald Rivera (the town’s water works supervisors). Namaan. Walker, Skyler and I stand back, take pictures and listen. 20 yards downstream is another box which serves as a distribution box, ensuring the mine gets the proper amount of water. We walk further into the forest and come across another concrete monster lurking under moss… it’s the other half of the intake structure, imprisoning yet another spring. this time, the structure is so large that you can lean you whole body into the trap door and shine a light at the collection of rocks that water is just pushing out from. These pipes from the two intakes merge, and the water raises in temperature as it flows down the mountain side, and the calcium and carbon that was collected from the rocks in the mountain start to precipitate as calcium carbonate on the walls of the tubing throughout the city. The two pickups that have four wheel drive struggle to get up the hill, using momentum on low traction sections to throw themselves through the loose rock. However, the third pickup that Antonio tenuously drove down the final slope will not make the hill. After a few tire-burning tries, we start improvised simultaneous group brainstorming and experimentation. The first attempt involves packing the back of the truck with people to gain traction on the rear wheel drive. We jump up and down on the rear with the hope of gaining sufficient traction on the downstroke. In between some more tire-burning attempts, we try letting air out of the rear tires to increase surface area in contact with the ground, we try putting people pushing from behind, and we try towing with the four-wheel drive trucks which just get stuck when asked to carry the extra load. The final solution was to have all 20 of us simultaneously pull using two frayed ropes, and push on the back of the pickup. I stayed back and filmed the final, successful attempt: 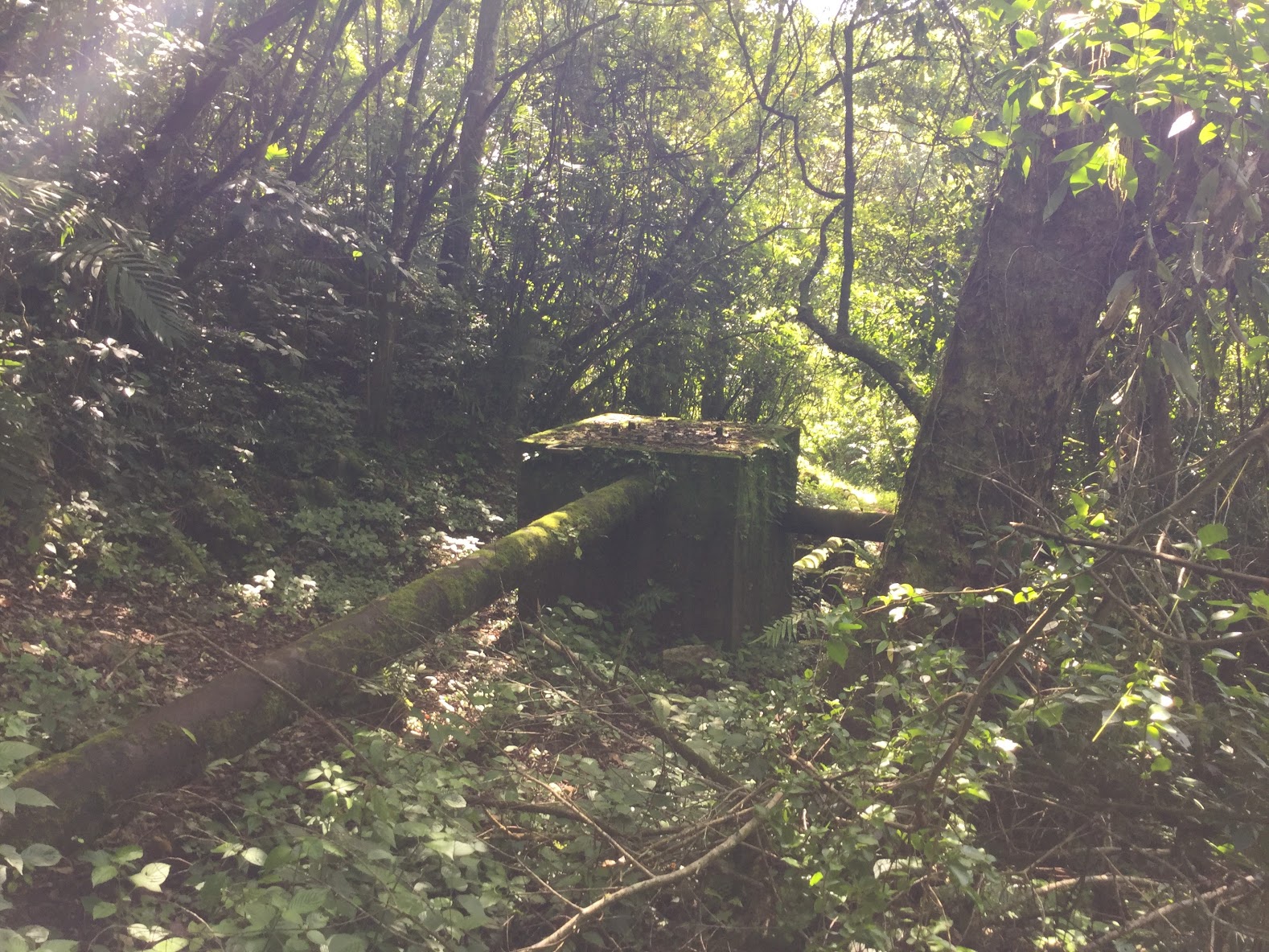 The secluded picturesque origins of the Las Vegas water supply. 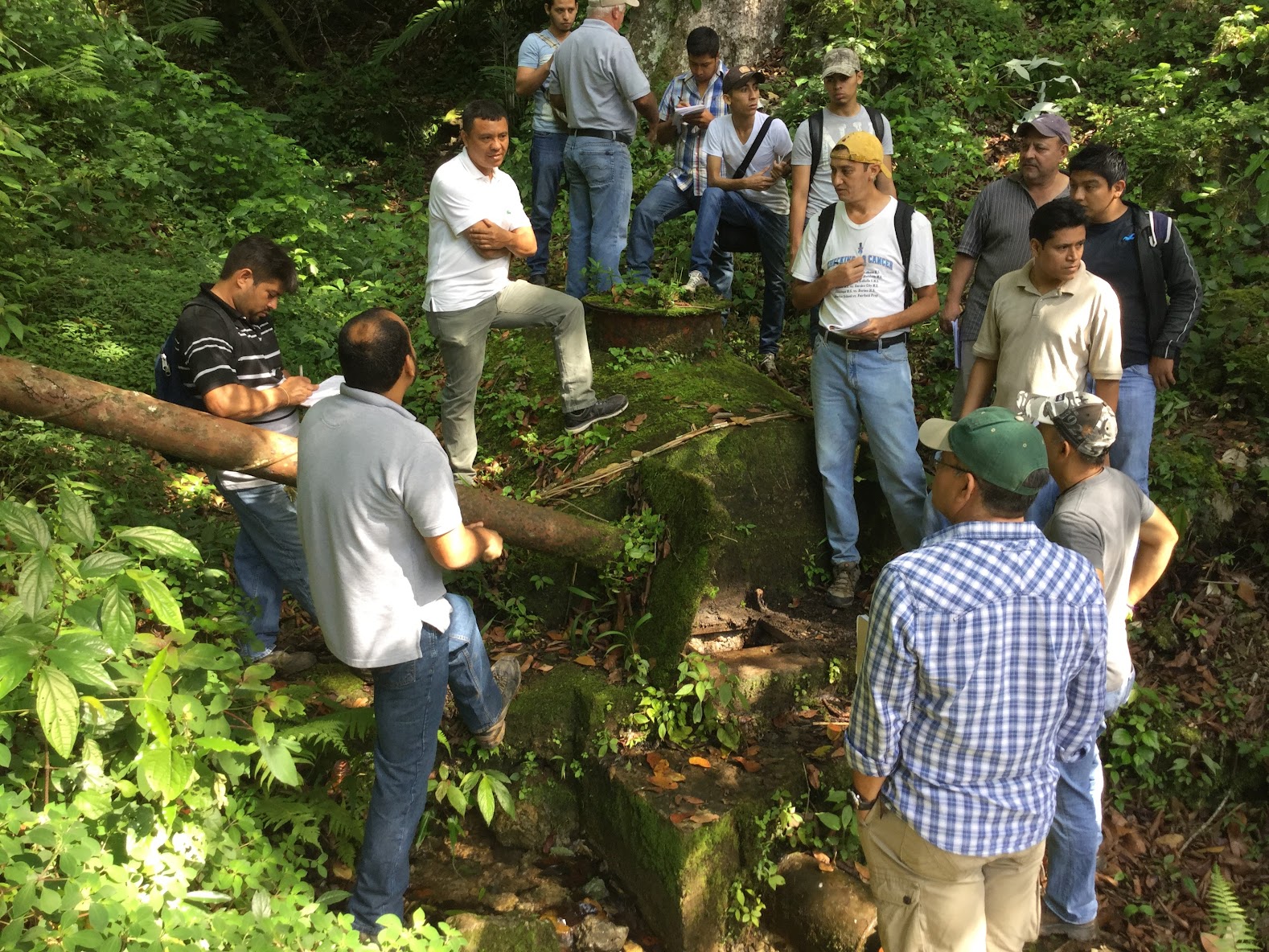 Skyler and I taught the operator lesson on basic mathematics. the goal is to teach enough math so the operators can do unit conversions when refilling the chemical stock tanks and dosing the plant flow. We started by reviewing multiplication, division, addition and subtraction and finished by converting my weight from pounds to kilograms. Some set the fraction up upside-down or used the wrong conversion rate. All the mistakes felt like old friends greeting me who I hadn’t seen for years.

This is the room we had them guess the retention time of. It also is the room in which we constructed the plate settlers.

We had the operators calculate the retention time (how long it takes water to fill a volume at a certain flow rate) of the giant Red Cross gymnasium we’ve been having our classes in if the maximum Las-Vegas flow rate were directed inside. In other words, how long would it take the building to overflow? Before reading on, you should look at the picture of the inside of the building, think about how large it is (20 m wide by 30 m long by 6 m tall) and that the max flow rate through the plant is 70 L/s. The operators’ guesses ranged from 10 min to 2 weeks. We had them break into teams and measure the building with a tape measure that was too short to do the whole thing at once. To get an accurate measurement, they would count and then measure regularly spaced things like the expansion cracks in the concrete floor, the cinderblocks in the wall, the metal I-beam posts holding the roof, and even units of Luis, one of the students in the group. Here’s their calculation:

As you can see, the calculation involved at least two unit conversions! They’re all over the place! Furthermore, that answer really surprised me. I thought it would be at least two days. This exercise emphasized just how much water we’ll be treating in this plant… roughly (70 L/s)(3600 s/hour)(24 hour/ day)(1 gal / 3.785 L) = 1.6 MGD (Million gallons per day) for those imperial unit lovers!