We just finished the first week of operator training in Las Vegas and we are driving back to Tegucigalpa, five of us in the white half-ton mitsubishi. In front of me sits German (pronounced Hair-mon), wearing a yellow shirt and a 1/2” haircut. He sports a fantastically round belly. He is the foremen at Las Vegas, overseeing 25-30 masons, welders, peons (helpers), and roofers (most of the workforce can do at least two of those jobs.) German wears a 2’ wide straw sombrero in the field. When Walker descends into the filter entrance box to show German particular dimensions, German descends with sprightly grace, his wide-brimmed hat bobbing with equal energy and form. He engages Walker in animated discussion using whole-body gestures and imaginary plant components to convey meaning with visual and tactile intensity. German does his job with such skill that he never appears to be in a rush, and yet the construction of the plant beats on steadily. German stays with us at the house in Las Vegas APP has rented. Almost every night, Namaan, the site-logistics employee, prepares eggs with tomato, tortillas and beans on a small four-burner camping gas stove. German is with us now to get a ride back to his family in Tegus that he might get to see once every other week. He has thirteen children. He went to the technical university in Tegus and has been working with APP for the last 8 years and has built 6 AguaClara plants in the past! 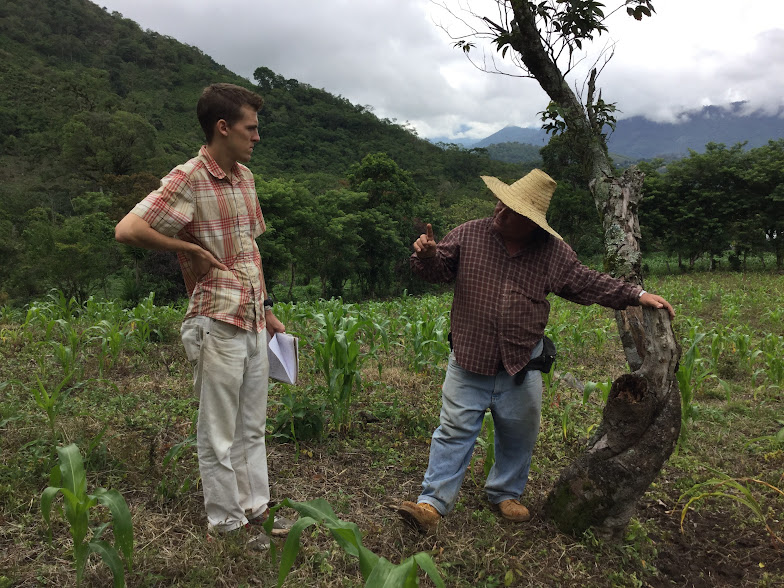 In the driver’s seat sits Antonio, a employee of APP for the last 25 years. He is the social coordinator, insuring that all of the projects we do are properly communicated to the community and that the operators are trained enough to make sure the plants have long time success. Four weeks ago Antonio took Skyler and I on a journey to a local amusement park that consisted of 4 pools and one 40-foot-tall slide with one 10-foot section of straight drop. The slide accelerated me to a velocity that kept me skidding across the water’s surface for fifteen feet before sinking. Antonio is always going out of the way to help Skyler and I feel at home in Honduras and settle in. Antonio taught the majority of these introductory weeks of training. He reviewed all the components of a water system, placing special emphasis on the need to protect the watershed. When we went to the town center in Atima, Antonio enthusiastically greeted everyone, remembering every member of every family. He’s had endless patience for Skyler and me learn spanish. He makes a concerted effort to speak slowly and deliberately, and has even helped Skkyler look for a pickup truck to buy in the city. On the way back from Tegus two weeks ago, we stopped at the eldest of his thirteen brothers, Abraham, to pick up a few boxes of rich mangos. Abraham of 60 years old drank coffee and ate mangoes with hot sauce with us for half an hour. His dog had at least three new puppies, one of which couldn’t walk. Abraham’s town is a tiny agriculture town an hour outside of Tegus. 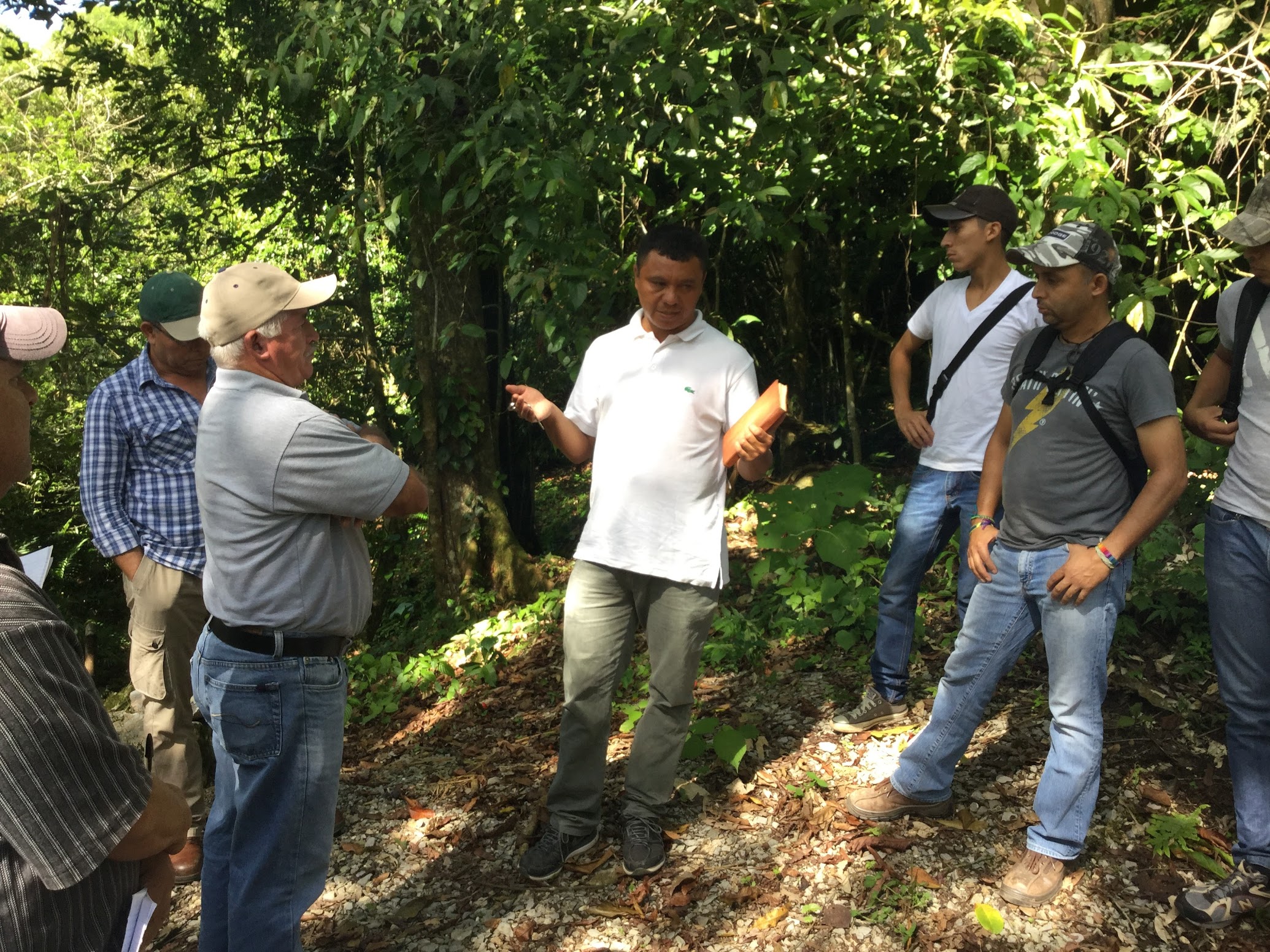 Antonio explains the importance of the watershed to the operators during a field trip to the Las Tumbas intake structure. 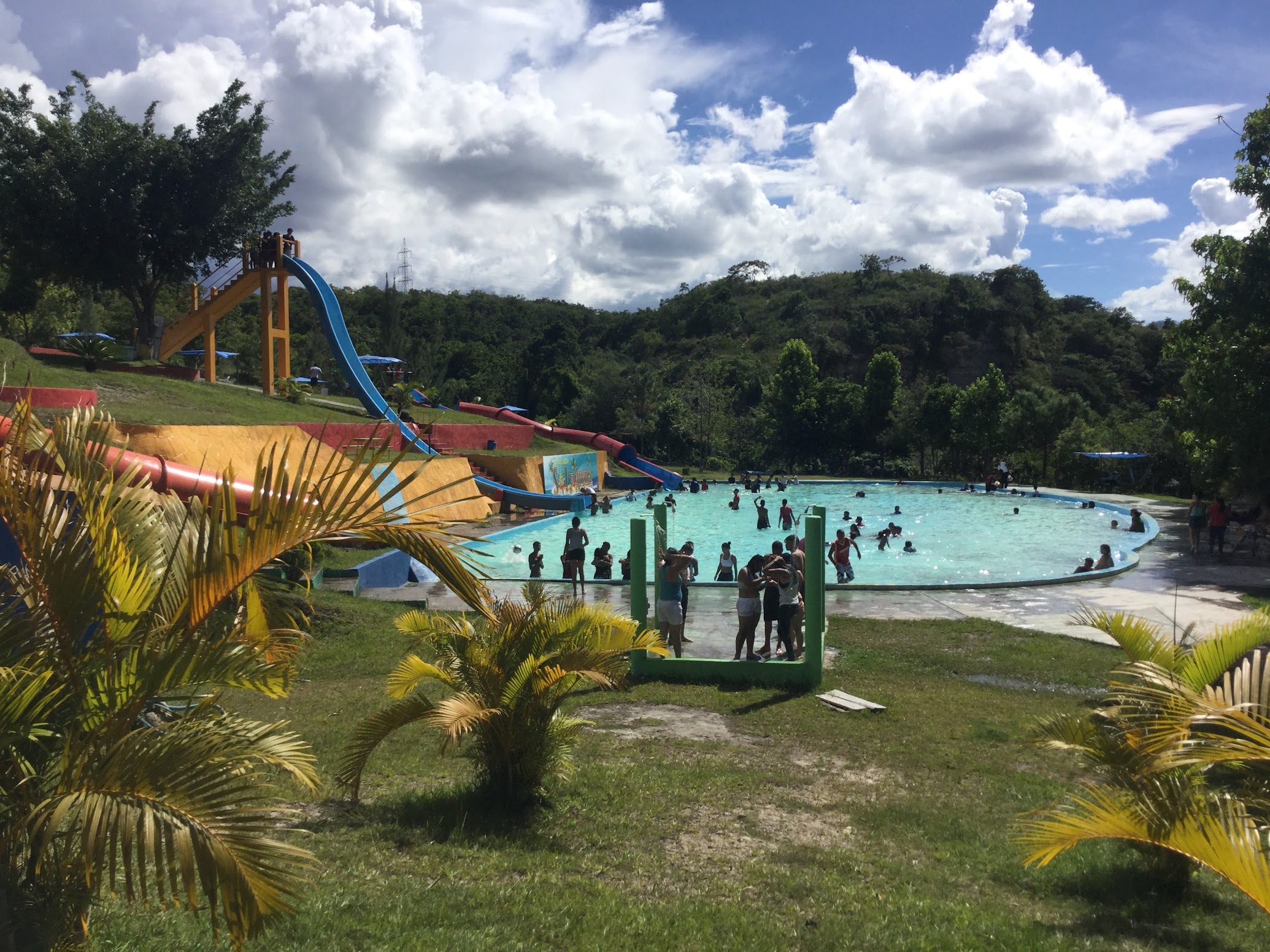 The largest single-curve slide I have ever seen. A shame I didn't get an action shot.

I ran up to the plant on Tuesday. The run is a two kilometer climb up the side of the mountain, gaining approximately 300 meters on a rough gravel road. The plant is on an almost-dead-end road that only services a few small farmhouses and the shambling shacks buried in the forest high on the mountainside. By the time I got to the plant at the top of the road a thick fog had obscured the mountain and softened the night. after yelling for a while at the gate, the security guard by name of Jose came timidly out to let me in. Jose is a 65 year-old lifetime resident of Las Vegas, with a wife and kids in the city center. He taught me the word for fog: Niblea. For the last 30 years, he’s been a security guard in Las Vegas, earning approximately $300/month.. In that time I’ve been born, experienced childhood, gone to college and finally come here to cross paths.

When I ran down, easily covering territory with twice the speed of my journey upward, I thought of the run ning water rushing from the distribution box near the plant site down and throughout the city,waiting at everyones taps to release itself into the various plastic, wood and metal bowls, buckets, piles feet, hands.. The next day I played fútball with some of the plant operators and a handful of kids from the town. we played in a quarter sized field caged in with chain-linked fences. The smaller field made it ‘futbol rapid’. I had never played soccer before in my life. I constantly feel like a child once again, deep in the throes of constantly learning and experiencing novelty. I feel humbled every day.

The view from the top of the plant. Taken the afternoon before I ran up.

Two weeks ago we went to Atima to install a new Flocculator baffle module and give the operators a brief re-training. A baffle module is a collection of carefully designed flow obstacles that force particles in the water to collide against one another and stick to form larger and larger flocs. The larger the floc, the more quickly it will settle in the sedimentation process, and the smaller we can build the sedimentation tanks. In AguaClara plants, we construct the flocculation modules out of plastic roofing and half inch PVC pipe to hold the panels at the correct position.

The PVC sheeting at Atima had been out in the sun for too long before they were installed in the plant, and hence became brittle and began to crack and warp. These failures let water short-circuit the intended path, enabling particles to avoid the collision-inducing jets. They also look ugly. We discovered the disadvantages of PVC sheeting on one of our yearly Cornell student trips, and have since used only the much tougher polycarbonate sheeting. A large portion of NGOs have little to no project follow-up, whereas the yearly Cornell trips afford APP the ability to keep a close eye on even the oldest plants that were built over ten years ago! Those trips bring 60 fresh student eyes to the system and are always a source of innovation and inspiration. 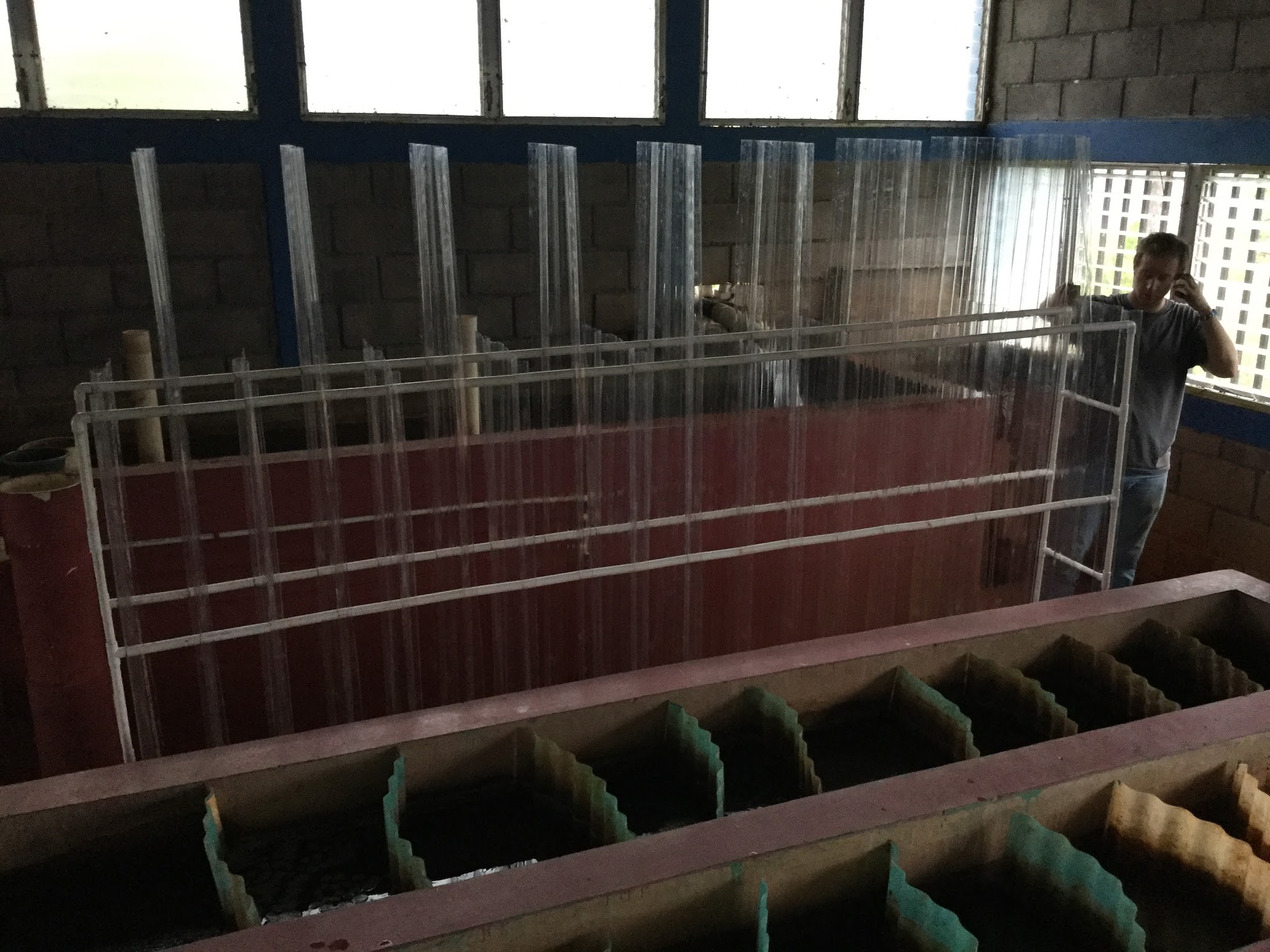 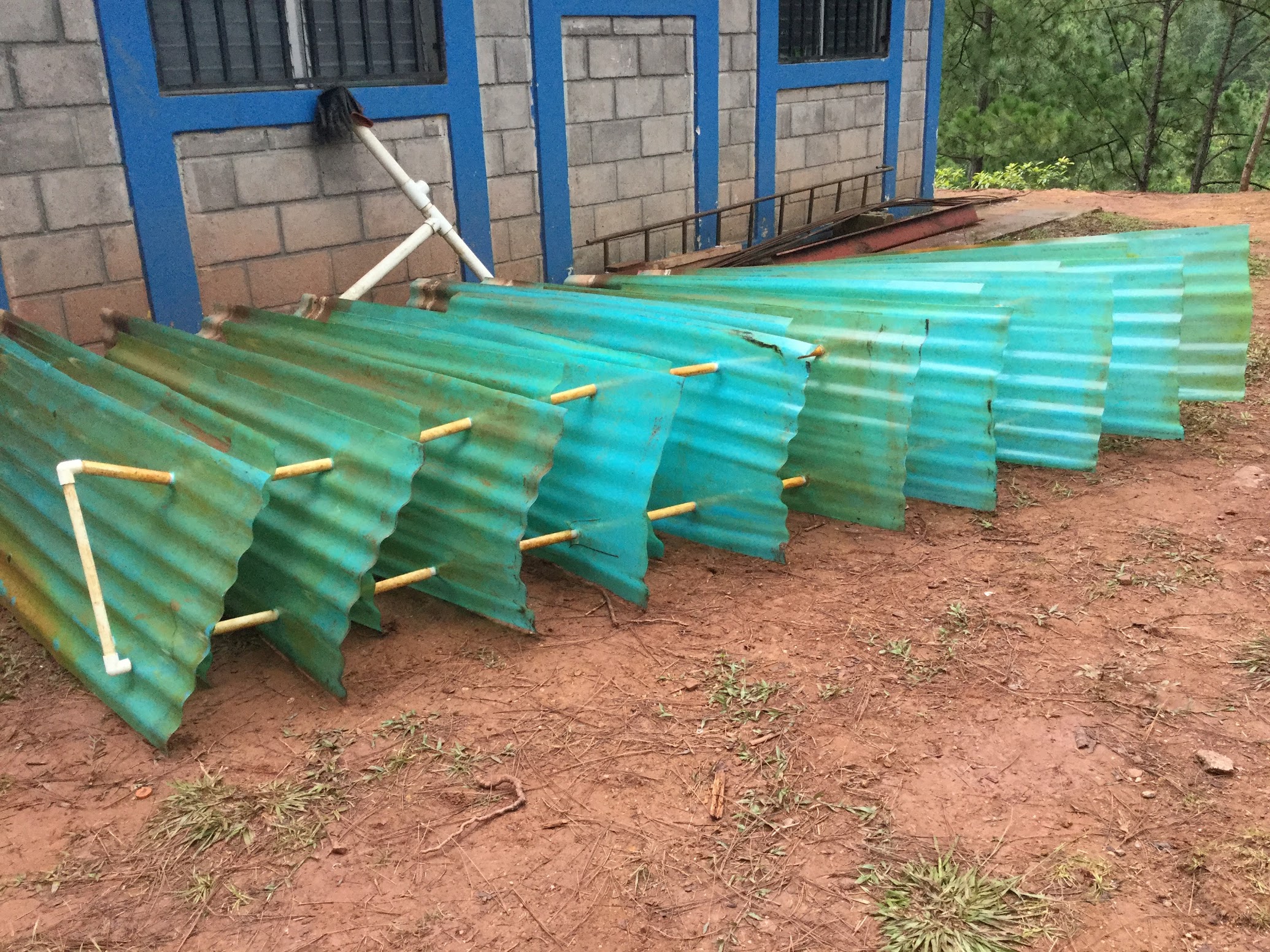 The clear polycarbonate baffling on the top and the twisted and warped PVC baffles on the bottom.

The Atima municipality paid for our visit. The community was able to source the materials themselves, and even found a local family who were willing to feed and lodge us. The family lived in a compound with a comedor or eatery out front and a large courtyard in the back surrounded by living quarters for the 7-10 family members. While the owner, Mrs. Lizbeth, showed us our bedroom, a small boy with a large head and a long gaze stayed just out of sight around a corner, looking at us with increasingly courageous intensity. Mrs. Lizbeth said she thinks he has schizophrenia. The wild dog population in Atima was large enough to fill virtually every corner with a German shepherd and Schnauzer mutt.

On our way to Atima, we stopped at San Nicolas, another town with an AguaClara plant. While we waited for some of the operators to show up, I explored the town center. A carefully trimmed tree with a drip line of 150’ covered the whole center in shadow. The austerity of the plain patio underneath emphasized the tree’s magnificence. It breathed life into the adorable mountainside town. 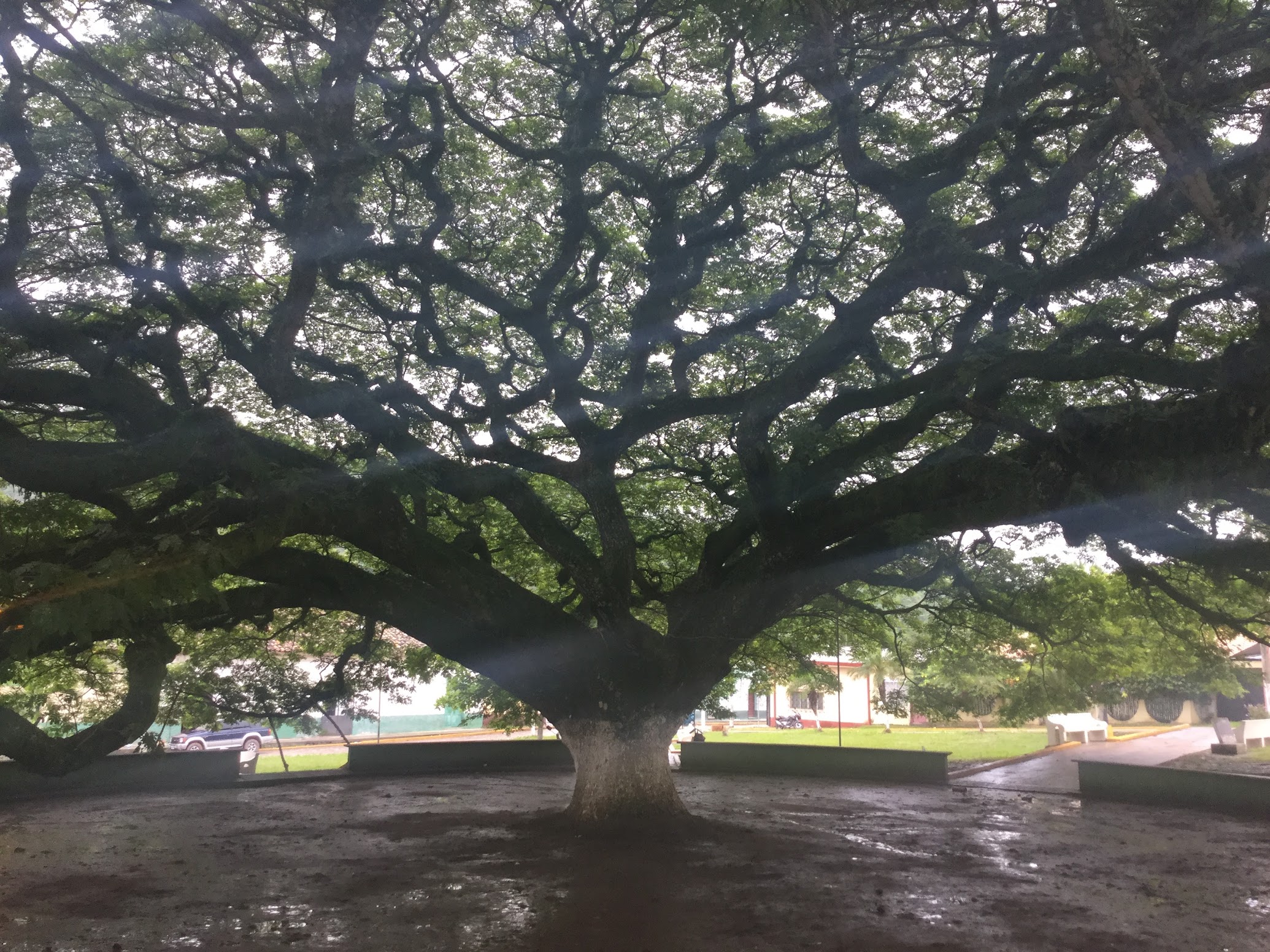 The great tree of San Nicolas

All of the towns here have well cared for town centers. They are usually large, with street venders, artwork, fields for fútbol matches, open gazebos with spiral staircases to the second floor, trees, and perhaps a few horses gnawing on the taller grass. The town center seems to be a critical component of the DNA of small Honduran towns and is so well replicated in flavor that even small details such as the lime-painted trees are consistent from town to town. In Atima, the town center was just as grand, and while sitting among strangers there under a street light, I found myself wishing that I will live in a town that places such importance on public space.

I am off for a run through the streets of Las Vegas before the sun sets.