Hello friends and family! Here’s my first blog post. It was written in a pickup on the way from Las Vegas, Honduras to Tegucigalpa. I hope life is going well in the States. By the end of today I will have been in Honduras for one week.

I flew into San Pedro Sula, the industrial capital of the country. United Airlines lost my bag so I went straight to the bag claim station. The airport’s bag check was a small room with twenty assistants all waiting to help Gringos with their bags. Behind the bag claim station there was only one Dell computer running windows xp. After waiting for 10 minutes at the desk, unsure of what to do, a few 5-10 year olds went behind the desk and started to play. I considered asking them about the status of my bag, but luckily in came their mother, a tall, elegant lady who spoke english with great precision. Apparently the United Airlines system thought I never boarded the plane to San Pedro Sula and thus they kept my bag at the airport in Houston. The lady behind the desk arranged to have my bag shipped to the country the next day. When it arrived, she had a teenager take my single bag in a beat up white sedan to me four hours away in Tegucigalpa at the expense of the airline. In the States, my bag would have been shipped via ups or some shipping service that would have aggregated many packages with similar destinations and ran a complex routing algorithm. Here some porter was paid less than minimum wage to drive eight hours to drop off my bag, and because absolute addresses don’t exist here and all gps programs are too unreliable here, we had to spend 10 minutes describing our location. This story exemplifies the inefficiency that seems to permeate life here. Ripe ground for engineers.

A view of Tegucigalpa from Pacacho.

Today Walker, Skyler and I hiked up the conduction line from the Las Vegas plant to the inlet box set in the river a few kilometers upstream. The hike followed a dried up stream bed slithering through dense, dripping jungle. Epiphytes the size of trashcans clung to vines, branches and boulders coated with liverworts. The forest smelled like the chunky soil that comes with a pack of Baby Bellas from the supermarket. We scrambled up the water-scattered, water-smoothed stream bed rocks, closely following the 6” white PVC conduction line that sputtered and gurgled with the stream’s captured life. I began considering the environmental consequences of diverting so much water from its natural path. Did the stream bed long for that water to slip over its rocks again? Would the tree roots depending on the river dry up and would those great trees fall into the river, toppling epiphyte hotels, hundreds of songbird nests and rich mushroom colonies? Would the local large predators move upstream for their water and stop hunting the vegetarians, allowing the undergrowth to be consumed unsustainably? Was the riparian life struggling with the change humans imposed on that finely tuned system or would it all just quickly adjust and reach a new equilibrium? From what I understand, no one agrees what the ‘proper’ way to conserve land is… should we optimize the system for long-term human benefits? And furthermore, environmental conservation is seldom a concern in cities that cannot fully meet their people’s most basic needs. I looked up to see the conduction line strung 15 meters over the streambed, held up by rusted eighth inch monofilament cable to form a 30 meter long bridge of epiphytes, mosses and lichens. Perhaps small rodents scurried across that bridge at night snacking on insects along the way. The first ‘intake structure’ was not so much a structure as it was a collection of three small pipes temporarily held in place by medium sized rocks. Any large enough storm rudely shoved the pipes out of the way, reclaiming the river with a mad torrent of dirty water. The alternative would be to let the river flow and instead create a proper intake structure downstream very near the plant location that the plant operators can easily inspect. Instead, either due to the lack of engineering talent, funds, or motivation, the city maintains this rickety, fragile system by having an employee walk the hour of conduction line both ways twice a day. 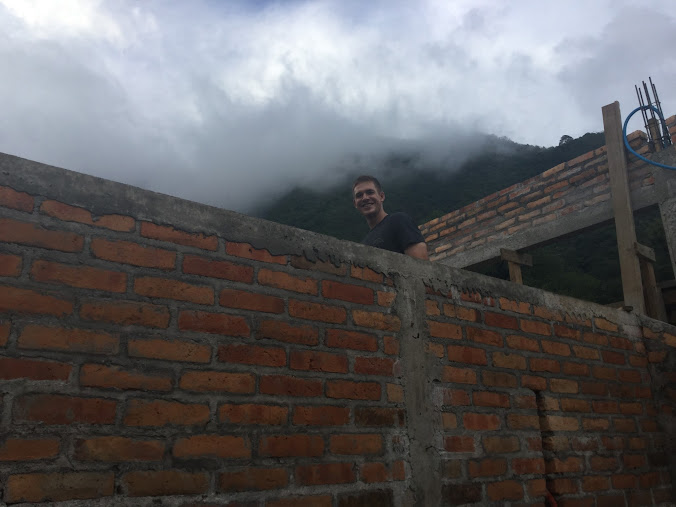 Skyler on the chemical plant platform in the Las Vegas plant

The Las Vegas plant site is near the end of a steep mountain road, some 300 meters above the city. Fifteen masons, a dozen runners and one foreman scurry around the plant, applying the final fine, waterproof coating of concrete to every surface. Some workers are deep in the 8 meter tall sand filter tanks, others reach over the edge of the long, low sedimentation tanks and slather the concrete coating on the inclined tank bottom. Other workers stand on shaky wooden scaffolding to reach the highest portions of the plant walls. The masons apply an incredibly even 2 cm layer of coating with impressive rapidity. This plant is large. It is roughly 15 by 20 meters. The sand filters at the end of the treatment train are dug 5 meters into the ground. There are eight sedimentation tanks running in parallel to treat a total of 70 L/s, that’s 11,00 gal/min! This plant also features a hydrochloric acid doser that will lower the pH of the basic influent stream, forcing the carbonate to stay in solution instead of precipitating on the distribution system pipe walls. Such a system saves the town thousands of dollars a year by stopping scaling and thus reducing the number of pipes that need to be annually replaced. Once the plant is built, it will require one operator to be there at all times, a monthly chlorine and coagulant dose drop off, and a quarter time salaried employee to walk the lines to check for cracks. The plant will supply 2,200 household taps with potable water, cutting the cost of drinking water to at least 1/10 to that of bottled water. If the city’s population were asked to pay the same amount for public potable drinking water as they pay now for bottled water, the plant would pay back for itself in a matter of a few years. With AguaClara technology, investing a relatively small amount of capital into the system can permanently reduce water costs and make thousands of people’s lives healthier and easier.

Skyler, Walker, Jon and I will start training the operators in all aspects of plant operation at the start of August. At the beginning of training, we’ll teach water chemistry and fluids theory to 16 potential operators that the water board has chosen. We’ll then take the top 6 performers on a written test, and have them fabricate the plant’s hydraulic modules. By building these components, the candidates will gain an intimate understanding of the plant, and will be able to repair/replace any components within the plant. During the construction process, we’ll assess every aspect of the potential operator’s performance and select the three best operators to run the plant. Throughout the whole process, the candidates get ample financial compensation for their time, and a certificate for each stage they’ve completed. Finally, the three candidates will operate the plant in conjunction with us for a few weeks, or until we are confident that the plant is in well-trained, capable hands.

AguaClara has built 12 drinking water treatment plants over the course of eleven years. All can and often do function at intended capacity, producing roughly a collective 150 L/s for over 45,000 people. The plants use no electricity and are able to clean even coffee-colored water to EPA standards. All of the plants are financially self-sustaining, meaning the water usage tariffs are able to entirely fund the operation and maintenance of the plants. The plants are run by democratically elected water boards that define tariffs, higher and pay plant operators, and maintain the plant and distribution system. Because the plants do not require any electricity to run, the operating costs are roughly one tenth of their traditional analogs found in the States. Furthermore, the AguaClara technology is backed by a sixty person student team at Cornell continuously developing new treatment and fabrication technologies. AguaClara even has a design tool that uses a large set of experimentally-validated equations and design constraints to design a 3-D model of the hydraulic portions of the plant. Those designs and the code to create them is entirely available with an open source license online! 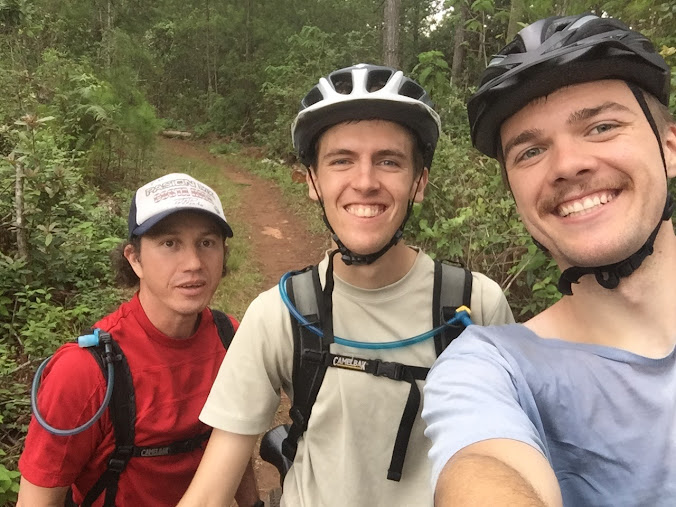 Ricky, Walker and I on the mountain-bike trail

Walker and I went on a mountain bike ride on Saturday. We went with Ricky, a small, strong, fifty year old Honduran bachelor, cyclist, rock climber, guitar repairer and conspiracy theorist. We met him at his house, a small tin-covered apartment in the center of Tegus containing heavy downhill bikes and dismembered guitars… I was an instant fan. He scurried around his house, anxiously collecting all the various accouterments of mountain biking from points all over the house. He then led us on a bike ride through the city and up the hill on the edge of the city. I believe we climbed over 500m in 6km, winding on switchbacks up a road with little to no shoulder. On the steeper sections, there were groups of teenagers who would zip down the hills on tiny BMX bikes most likely with weak breaks. Once they had skidded to a stop by slamming the heels of their beat-up Nike Airs on the ground, they’d turn around and wait for a bus or dump truck to grab onto the back of and ride up the hill. It wasn’t uncommon to see 4-6 kids gripping on to the metal lip of an ascending truck. At the top we turned onto an orange clay road with 8” ruts and proceeded up the steepest hill yet. Ricky said that portion of the ride was called “Buen Dia” because when he rides with his friends at 5AM in the morning, if anyone hasn’t woken up by the earlier climb, that hill is sure to be the proverbial bucket of ice water and resounding “good morning” that rudely awakens you from stupor. After digging into the forest a bit more, we found a couple hectares of forest that had recently been clear cut, containing only one foot high stumps that seemed to stubbornly remind the loggers of the trees’ previous might. The government claims that they are clear cutting only the areas infested with “Gorgojo,” a beedle that infests the bark and turns the pine needles red. Ricky says the presence of the Gorgojo is used as an excuse for the government to twist environmental protection interests into a disguise for the financial motivation of the lumber industry. This sort of corruption is so commonly confirmed in Honduras that Ricky’s explanation could very well be correct. A couple months ago the public found out that the corrupt Honduran president Juan Orlando had re-routed 300 million dollars from the national healthcare system to his personal campaign funds. Months of protesting in cities across Honduras resulted in only the resignation of a few officials and the creation of a board stacked by the President that is purportedly for monitoring national funds more carefully. The ride down the mountain consisted of a series of 100 m long 45 degree slopes and carves that required complete attention and filled my blood with adrenaline. 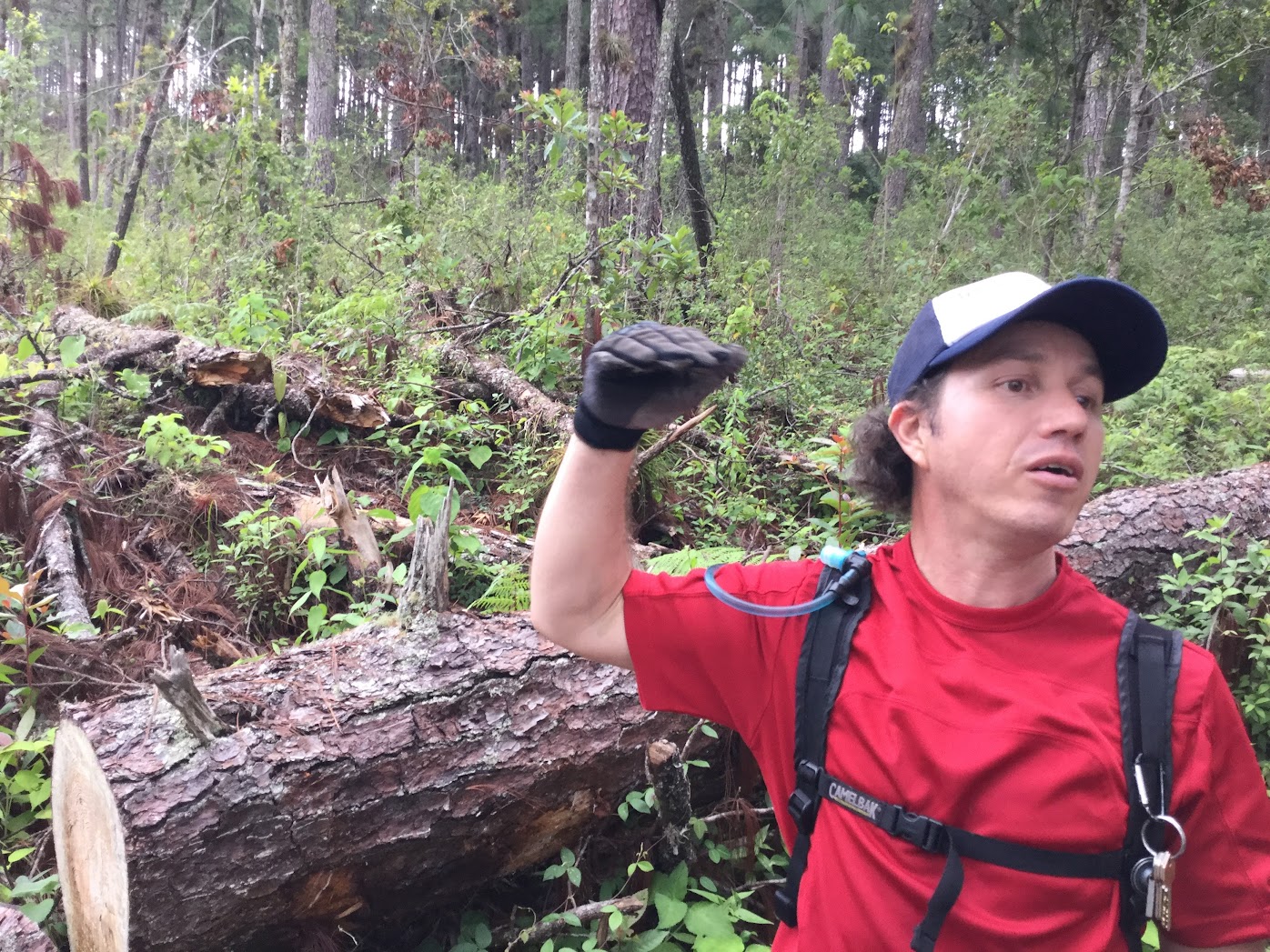